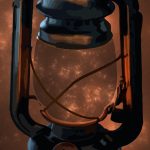 Lantern is a response to J.S. Bach’s Ricercar a 6, a staggering 6-voice fugue from The Musical Offering. The ricercar is charged with a tenacious searching quality, always pressing towards resolution. Each time one of the six voices enters with the main theme, the music surges forward with renewed vitality, manifesting a beautiful, florid landscape. Wanting to mimic the experience of those successive voice entrances, Lantern makes frequent use of delays or echoes. Instead of waiting for a theme to be presented completely, a second voice will often interrupt or overlap with the first voice, just a few beats later. As Bach’s ricercar grows increasingly detailed, so, too, does this piece. The number of echoes increases, as does the speed of their entrances. At the climax, the material finds resolution by compounding echoes, forming a powerful blur of harmony. While developing this material, I began to imagine these echoes as lantern light, continually flaring and casting an ever-changing array of shadows around the music.